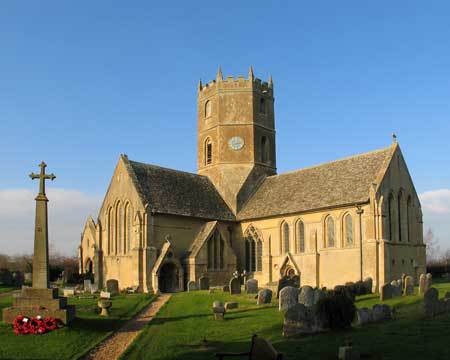 St Mary’s Church, Uffington, built in 1250, is known as the “Cathedral of the Vale”. This is because it is a large church, with a high standard of design and workmanship, which must have been built by a wealthy patron rather than as an ordinary parish church. 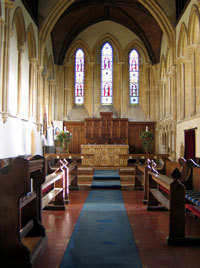 A charter from the 10th century relates that the manor of Uffington was given to Abingdon Abbey and that a church was built here in 1105.  This connection explains why today we have such a splendid church as it was likely to have been built as an outpost of the Abbey, replacing the earlier church, of which only one small arch by the alter remains. Luckily the church has never suffered extensive restoration so the interior retains its elegant Early English character; a style which lasted from the late 12th century to the early 14th century. The arches were built pointed rather than rounded as with the earlier ones, and the windows were narrow, often grouped in threes.

The church is built using sandstone, imported from outside the area, but much of the building is rendered to protect the walls from the weather.

Part of the west wall showing two of the roundels and some of the arch stones re-used in its construction.

Abingdon Abbey retained its interest in the manor until the dissolution of the monasteries in 1537. Church records since then show that keeping the building in good order has always been a problem. In 1674 the church wardens reported that the church was “ruinated by the late warrs”. This refers to the Civil War between the Crown under Charles 1 and the Parliamentarians under Cromwell. The west wall had to be rebuilt and this shows in the assortment of stones used, some of which clearly came from arches. The windows here have strange flat arches for which there is no clear explanation. By 1736 the church was reported to be in good order.

Unfortunately this did not last long as it is recorded “Ther was Uffington stepel beat down by a tempas wind, thunder and liten december 2nd day 1740”. The falling masonry must have done damage as it fell and the steeple was never rebuilt, the existing tower replacing it. The church has a timber roof which is shown in an engraving from 1805 with a shallow pitched roof covered in lead. This would not have been the original roof which would have had a steep pitch like the present one which replaced the flatter one around 1814.

The eleven lead roundels around the outside of the church would have held bronze or copper consecration crosses and are similar to those on Salisbury Cathedral. There would have been a twelfth one on the sacristy, which was on the north side of the chancel where, on the outside, the old roof line can still be seen (as can a blocked-off doorway).  The three chapels off the transepts were most probably built for monks to pray in and have unusual windows.

The south porch has fine carved foliage capitals and an old door with its original ironwork. The two figures in the external recesses were carved by Heidi Lloyd from Woolstone in 1975. They are of Alfred the Great and St George. On the outside of the porch are the Thatcher family memorials, Sir Dennis Thatcher left a bequest for a plaque to be added here added on the death of Lady Thatcher.

On the south side of the chancel there is a more elaborate later window, in the decorated style from the 14th century, which was most probably put in to give better light by which to read. This now contains a lozenge-shaped etched glass panel by Helen Godsell which was installed to mark the Millennium. 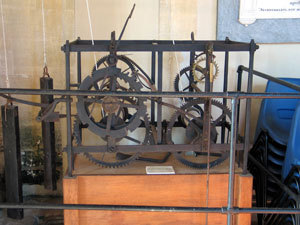 When this church was built, England was a Roman Catholic country and, especially in an Abbey church, all emphasis would have been on a suitable chancel for the monks and a plain nave for the public. The inside has been described by Simon Jenkins in his book The Thousand Best Churches as an “immaculate early Gothic interior”. Some work was done in 1851 under the supervision of G. E. Street a well known local architect; he suggested the raised chancel and Victorian tiles which are still there. None of the old fittings are left but the workings of the old clock built in 1701 can be seen. This clock had no face; a fact, combined with the loss of the steeple, which gave rise to the rhyme inscribed adjacent to the clock "Oh Uffington – poor people, Got a Church without a steeple, But, what is more, to its disgrace, Got a clock without a face".  The present clock visible on the tower dates from 1910. Over the cross can be seen a plain chandelier crafted by Mervyn Richings, a village blacksmith, in memory of his predecessor, Ernie Packer. 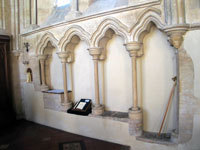 On the south wall of the chancel there is the original sedilia, a series of three seats under small arches, for the clergy. The fourth arch has the piscina or basin for washing sacred vessels. There are a number of simple tablets on the walls and a splendid Jacobean tomb to John Saunders in the south transept. In the north transept are a memorial from 1603 to Edward Archer and a fine brass memorial to Thomas Hughes. 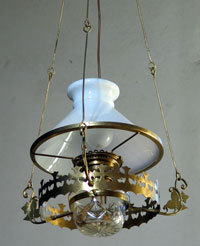 One of the converted oil lamps

John Betjeman, then a church warden, insisted that the old oil lamps were preserved when electricity was introduced in the 1930s.

There are now six bells which are regularly rung. There is a record of five bells being recast in 1657 but all the current bells are of a later date. In 1992 a new frame was installed and the bells were all tuned with a new treble being cast by the Whitechapel foundry.

Visitors are welcome but are asked to respect this beautiful old church which is in regular use. The church is usually open and access is through a small doorway at the southern end of the south transept. 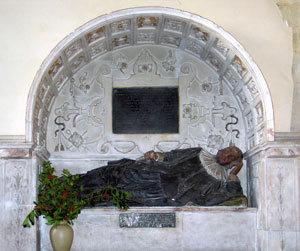