The White Horse of Uffington is one of the most impressive sites close to the ancient Ridgeway path. Other sites include Dragon Hill, The Manger and Uffington Castle – all the subject of legend and folklore. 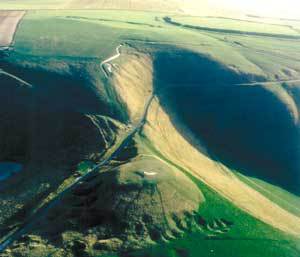 Though on the Berkshire Downs, the White Horse has been in Oxfordshire since county boundary alterations in the 1970s. With its elegant lines of white chalk bedrock, the Horse is thought to be the oldest hill figure in Britain. The image is a stylised representation of a horse (some would say dragon) some 374 feet in length.

Until 1995, the Uffington White Horse was thought to date from the Iron Age. However, in the 1990s, a new dating technique called optical stimulated luminescence dating (OSL) was developed. This technique can show how long soil has been hidden from sunlight. As the lines of the horse consist of chalk-filled trenches dug in the hillside, it has been possible to apply OSL testing to the soil between the lower layers of that chalk. This revealed the Horse to be some 3000 years old; dating it back into the late Bronze Age.

Images similar to the outline of the Horse have been found depicted on coins from that period, and it is thought that the figure represents a horse goddess connected with the local Belgae tribe. The goddess is generally believed to be one form of Epona, worshiped throughout the Celtic world.

The horse was ritually scoured every seven years under the jurisdiction of the local Lord, who had to fund the event. The festival - for that is what it became - could last for over three days and consisted of fun and games, traditional cheese rolling, wrestling and other pastimes. The focus of the games was in the enclosed earthen banks of Uffington Castle an Iron Age hill fort, to which the White Horse seems to be galloping when viewed from the air. The cheese rolling was held on the steep sided valley known as The Manger, the place where the horse was said to feed on moonlit nights. The festival, including a ‘scouring’ of the Horse (dressing it with fresh chalk) was recreated by the villagers of Uffington as part of their Millennium Celebrations. 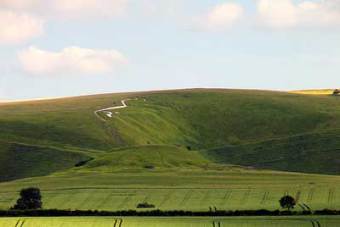 White Horse viewed, at ground level, from the North with Dragon Hill in the foreground

Traditionally the horse is attributed to a number of famous figures, one of these is King Alfred, who is said to have had it constructed to commemorate his victory over the Danes in 871. The horse is also said to been cut by Hengist, the leader of the Anglo Saxon horde in the 5th century AD. Another piece of folklore suggests that the figure is actually a representation of the dragon killed by St George, an event thought to have taken place on nearby Dragon Hill.

The Horse is best viewed from the air – sadly not an option available to the average visitor. However, good views can be had looking towards the Hill just after leaving Uffington village on the road to Longcot.

The White Horse is situated just off the B4507, about half way between between Wantage and Swindon. Follow signs to a car park which has been created in a former chalk pit; the Horse is then a short walk away. Entry is free though car park charges do now apply.There are no permanent visitor facilities. When visiting, please remember to lock your car and place any valuables out of sight.